The College's books are divided broadly into three collections: the Mediaeval and Musical Manuscripts (which are now deposited in the University Library); the Perne Library; and the Ward Library.

The mediaeval library began almost with the foundation of the College: one of the first recorded gifts to the Society is a number of books left to it by its founder – Hugh of Balsham, Bishop of Ely – on his death in 1286. The present collection of some 270 manuscript volumes represents over half the working library which was accumulated by the College during the two and a half centuries after its foundation; and it is one of only three such collections in Cambridge – nearly all the other colleges, and the University Library itself, having discarded in the course of time the bulk of their earliest holdings. It is the fruit almost entirely of the generosity of the College's own members. Apart from the Founder, in the fourteenth century Thomas de Lisle (a later Bishop of Ely) and William of Whittlesey (Archbishop of Canterbury) gave numerous books to the College; and at least three Masters made substantial gifts in the century following. In addition, many Fellows made gifts of one or two books over the years – including the earliest of which the titles have been identified, two from John Malebraunche, who was a Fellow in 1290. The collection was at first stored in chests, in the same place as the College's charters; but by 1400 a room had been set aside (though it is not known in which part of the College) especially for books. In 1450, a large library built for the purpose was opened on the first floor of the west range of Old Court (in the space now occupied by, respectively, the Upper Sexcentenary Club and the present Ward Librarian). The books kept in the Library were chained, while others circulated among the Fellows. This library room fulfilled its functions until the end of the sixteenth century.

The Musical Manuscripts consist of three sets of choir-books. The 'Henrician' set (in Latin) can be dated to the later part of the reign of Henry VIII. The two 'Caroline' sets (predominantly in English), with a contemporary organ-book, date to the early part of the seventeenth century. It has recently been suggested that the 'Henrician' set (which shows little or no signs of ever having been used) was copied from manuscripts belonging to Magdalen College, Oxford, and that the collection was originally intended for use at Christ Church, Canterbury.

The second of the College's collections, the Perne Library, now numbers some four thousand volumes; but at its core is the bequest of Andrew Perne (Master from 1553 until his death in 1589) of a large part of his own collection – one which had already been described twenty years before as "the worthiest in all England". Perne was a bibliophile of catholic tastes; and the collection is distinguished by numerous early examples of fine printing from the great continental presses; fine illustrated books; and a large number of early scientific classics. Perne's books have now been dispersed throughout the collection by subsequent reshelvings, but an early catalogue survives which shows them to have numbered some 1,200 volumes. Some were later certainly or probably exchanged for more up-to-date editions, but comparison with Perne's will and the actual holdings shows that no more than 40-odd have been lost.

The building which housed them occupied the western two-thirds of the present site, and it was built immediately after Perne's death, from funds left by him for the purpose. It was completed in its present form, by being extended as far as Trumpington Street, forty years later; and the present furniture dates from shortly afterwards. The substantial growth of the collection was again made possible by gifts from the College's own members.  John Cosin, Master from 1634 until he was deposed by the Commonwealth ten years later and (after the Restoration) Bishop of Durham, was perhaps the greatest of the early benefactors – he gave over eight hundred volumes; but the Library benefited from the generosity of many others, in differing degrees, in that century and the one following. It is piquant to recall that the College owes a good deal even to Lazarus Seaman – the nominee who supplanted Cosin; for it was his tenacious defence of the College's interests which ensured that Cosin's books came to the College, and were not lost in the general confiscations.

The third of our collections is the Ward Library – the undergraduate working library of some 65,000 volumes, which opened in 1984 in the building in Little St Mary's Lane that, for a hundred years, had housed the Museum of Classical Archaeology. The Library takes its name from Sir Adolphus Ward, who was Master from 1900 to his death in 1924. Until his death, all the College's books had been housed in the Perne Library, the cases of which had been built up and adapted over the centuries to take them. Ward left some 5,000 volumes to the Library – chiefly of English literature and English and foreign history. They were too many to fit into the Perne; and so his bequest precipitated the foundation of a library designed specifically for the working requirements of undergraduates. For the first thirty years of its existence it was housed in Burrough's Building – first in one room on the first floor, and eventually taking up both first-floor sets – which provided both a bookstack and a reading room. The Perne Library, having been reduced to proportions which could be accommodated largely in the original cases, reverted to being a scholars' library, and was open only for the purpose of research. In 1952, however, the growth of the Ward made another move imperative. The Ward books were now moved to the attics of G staircase, and the Perne Library was reopened as a reading room.

Thirty years later, the continuing growth of the Ward, and the danger to which the Perne books were exposed in an open reading-room, led us – supported by the generosity of the College's members and of its friends – to move it to its present quarters. The Perne was relieved of a great many nineteenth-century accessions (transferred to the reserved collections in the Ward) and, handsomely restored and redecorated, reverted finally to being a research library. This splendid transformation of much of the Museum building into our Library enabled the Ward collection to be worthily housed, for the first time for many years, under one roof. Twenty years further on, the College, supported again by generous benefactions, extended and completed that transformation, by converting the last unused gallery of the old Museum into a magnificent reading room (with adjoining computer rooms) – named the 'Gunn Gallery' after Dr Chan Gunn, an Honorary Fellow and its principal benefactor, who read Medicine at Peterhouse in the 1950s. In consequence, the Ward Library now provides members of the College with more comfortable and liberal amenities for study than at any time in its history. 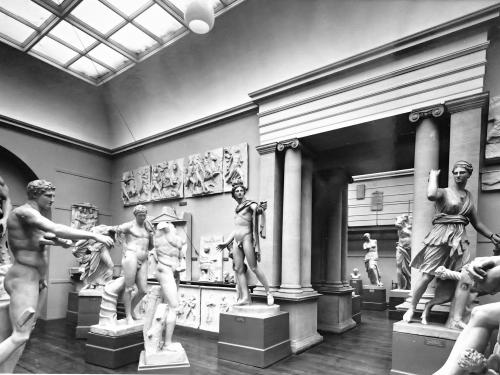