Linguistics, the scientific study of language, aims to discover the common properties that languages share with one another and thereby ultimately to help us learn about the structure of the human mind.

It encompasses a broad range of approaches to language, and deals, for instance, with questions as diverse as how we recognise the individual sounds of a spoken conversation, how meanings are communicated indirectly, how children learn their native language, or how different unrelated languages share so many grammatical similarities.

In the first year (“Part I”) of the Cambridge course, students are provided with a foundation covering the main areas of theoretical linguistics, while courses in the study of language variation, language and the brain, and the history and varieties of English serve as a bridge between theoretical linguistics and topics typically taught as part of A level English Language or Psychology. After the first year, students proceed to the two-year Part II, where they are able to specialise in those areas that particularly appeal to them. Papers cover a wide variety of topics ranging from experimental work in phonetics, to looking at the grammatical structures allowed in language, how languages change, or the linguistics of particular languages. In their final year, students write a dissertation on a topic of their choice.

As in other small subjects, most teaching is organised at departmental level. Peterhouse is one of the few colleges to have an internal Director of Studies in Linguistics, Dr Nicholas Zair, who has research interests in writing systems, sounds and morphology of ancient languages. He is currently working on the languages of ancient Italy. Professor Mari Jones, Fellow and Tutor of Peterhouse, is a University Professor in French Linguistics and has research and teaching interests in language obsolescence and revitalization, language contact and change, and dialectology and standardization. Her work has focused particularly on French, Norman and the Celtic languages.

For most of our students, Linguistics is a new subject that they have not studied formally before. Some may have developed an interest in language from doing English Language A level, while for others the initial stimulus may have come from learning a foreign language or experiencing different dialects and languages in their everyday lives. Because of this diversity of backgrounds, we do not insist on any particular subjects, but are looking instead for intellectual curiosity about language, a passion for the subject and an ability to think about language in a logical and precise manner. Successful candidates are likely to have shown evidence of intellectual independence, for instance, through independent reading in relevant areas. Subjects that could serve as a good preparation for this course include English Language, a foreign language, maths, psychology or a science.

All applicants for Linguistics who are invited for interview will sit a common assessment shortly before the date of interview. No registration is required for this assessment.

Candidates can expect to have one interview. This aims to test your ability to think creatively and logically about language, to work out the structure of an unfamiliar language, and to establish your motivation for the subject and degree of engagement with it.

Our typical conditional offer for Linguistics is A*AA at A level. IB offers are usually for a minimum of 40-42 points, to include 776 or 777 at Higher level in relevant subjects. Offers are designed to be realistic, taking into account individual circumstances, and to reflect potential and likely levels of achievement. Most of those who receive offers will attain the grades required. 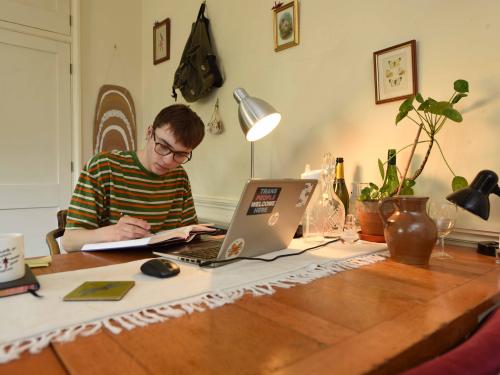 Details of how to apply to Peterhouse: how the process works and what we look for.